No products in the cart.
$0 Cart

No products in the cart.
$0 Cart 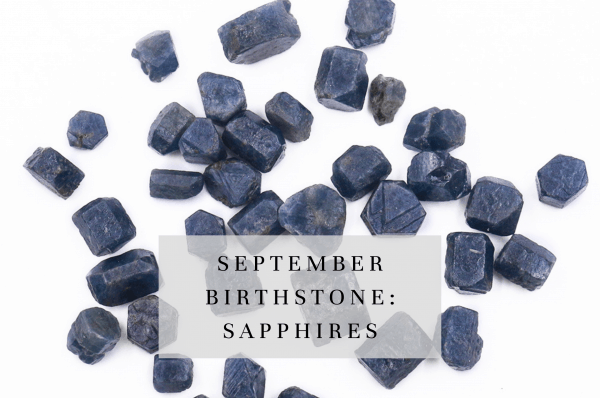 Alongside diamonds, sapphires are a really beautiful, durable stone. They come second to diamonds on the hardness scale, making them a perfect addition to any heirloom piece that you’d like to treasure for a lifetime. If you’re a September baby, Sapphires are your magical birthstone – lucky thing! We adore working with Sapphires and many of our collection pieces feature stunning Sapphires for you to wear and cherish.

Here are our favorite ten reasons as to why we LOVE sapphires;

1. Sapphires are often associated with holding mystical powers. In ancient times, it was believed that sapphires protected from evil, and the stone often symbolizes nobility and faithfulness.

2. These beautiful gems are formed from volcanic activity – the slower the magma cools, the larger the sapphire will be. The blue color comes from the mineral corundum, found in igneous rocks. Due to the natural circumstances, no two sapphires will ever look exactly the same.

3. Australia has been a major sapphire producer for over a hundred years, and once produced around 70% of the world’s supply.

4. Due to the high iron content in Australian sapphires, they are typically dark blue. However, Australia is also home to Patri sapphires which are a rare type of Sapphire that cannot be be replicated in the lab. They include two or three colors in the stone in blue, green and yellow hues.

5. Sapphires can come in all colors. From white to yellow to green or pink (with the exception of red, which is a ruby). A particularly special variety of the gemstone exhibit different colors depending on the lighting; often changing from blue in daylight to purple in incandescent light.

6. The most famous royal sapphire today is the engagement ring given by Prince Charles to Lady Diana in 1981. It features an 18-carat oval blue sapphire surrounded by diamonds. It’s now worn by Princess Catherine.

7. Some Sapphires can exhibit a beautiful phenomenon called the ‘star effect’ or asterism. Needle-like inclusions create a six-ray star pattern on the surface of a cabochon-cut sapphire and are often called a ‘star sapphire’.

8. The rarest type of sapphire is a pinkish orange variety called padaradscha – which comes from the Sanskrit word for lotus flower.

9. Sapphire is the birthstone for the month of September. It is also the traditional gift for 5th or 45th anniversaries.

10. The largest sapphire ever cut is the Millennium Sapphire discovered in Madagascar and weighing 61,500 carats.

Did you know? You can customize any of our pieces with your choice of stone, including sapphires! Shop and customize your piece here or contact us to talk about incorporating Sapphire into your unique, handmade heirloom.

We use only Conflict-free & Fair-trade, ethical diamonds from small-scale mining sites (Mostly from Brazil & Australia) in our studio. If you are interested in reading more about it, press here

Made by hand with love

ENGAGEMENT
SHOP BY CATEGORY
SHOP BY COLLECTION
SHOP BY OCCASION
About

About
5 reasons to…
Sustainability
One tree donation